In an earlier, perhaps simpler time, the oft-quoted, philosophically concerned pop star of our modern era, Cyndi Lauper declared “girls just wanna have fun”. In many ways, this quote still rings true today. It was with this spirit of excitement and adventure that I embarked on a trip to Korea’s Jeju Island on an ordinary Wednesday morning. I was off to do a night shoot for some sort of party scene that would show in an upcoming MBC drama called “King 2 Hearts”. Normally the idea of a trip to Jeju would be exciting in itself, as its often described as Korea’s Hawaii (this is an accurate comparison in so much as Jeju is an island situated further south than the country’s mainland. However, if you’re heading there in the winter, don’t bother packing your bathing suit. You will be cold and disappointed.) 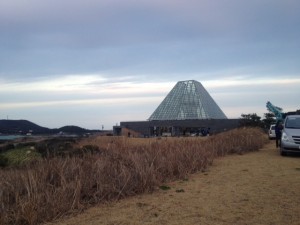 I was more than usually excited for this trip as none other than Lee Seung Gi, my not-so-secret-“secret crush” was also in Jeju shooting for it! In my 13 year old schoolgirl daydreams, he would notice me as I was bumming around set, bored and stuffing my face with whatever snacks were available (look! I maintain some degree of reality in my daydreams!) and upon noticing me he would instantly be struck by my radiating, effervescent charm. We would lock eyes and beautiful, wondrous infatuation at first sight would occur!

In other scenerios there were fires and I was saved from a burning building, and I saved him from a burning building and we both were saved from giant tsunami waves and aliens abducted us and it turned out we were jedi knights, and we got sorted into the same house at hogwarts. I wouldn’t say that I waste a lot of brain power on such thoughts, but if I didn’t spend so much time daydreaming, I could probably have cured cancer, flown to mars, and brought about world peace by means of puppies already. Okay, maybe not with puppies. Keeping it real. 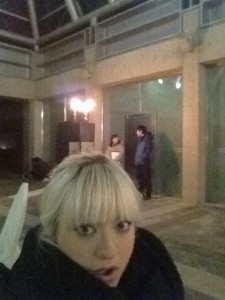 So, as I spent the night in a thin dress, with the frigid winter night jeju wind blowing off the beach and straight onto me, teeth chattering and knees shaking, with Lee Seung Gi nowhere in sight due to the fact that he wasn’t in the scene, I experienced a massive wave of “anticipointment”. You know that feeling of disappointment you get after your high hopes and anticipations are dashed against the cruel, pointy rocks of reality?

Okay, enough with the sea imagery!

Besides the fact that not a single one of my daydreams actualized into reality, and I spent the night freezing, and I was stuck in bed with a cold for most of the next week, I did manage to have a lot of fun with the other extras in the scene as we huddled together for warmth between takes and stuffed ourselves with pastries throughout the night and took funny pictures with the security guards’ prop guns ^^ 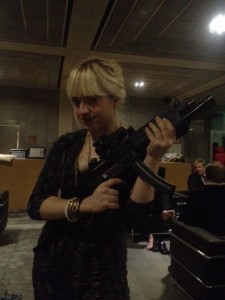 Truth: me or Angelina Jolie?

That said, I almost died with envy when my friend told me that he got to meet Lee Seung Gi during filming the following weekend! AIEEEE!

I’m gonna buck up, keep my head high and go on living courageously. It’s the only way to get past this sort of tragedy. A strong fighting spirit, copious amounts of soju, and maybe a couple more pastries. That’s the cure.