I’m about to graduate from The Second City’s writing program! Yay! 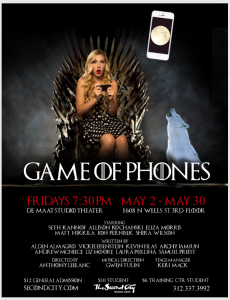 After months of dedicated writing, revising, and rewriting, my class has thrown out 99% of what we wrote and labored through flames to forge a Second City-style revue!  For the rest of the month of May we will be putting up our show: Game of Phones!

It’s Friday’s at 7:30pm in the de Maat Studio Theatre at The Second City! You can purchase tickets online here at Second City’s website 🙂

Not only did we write all of the material, we also cast some amazingly talented actors from a great pool of Second City student talent! It’s been an incredibly insightful and eye-opening experience to go through the whole writing process, cast an ensemble, and see our writing brought to life on stage.

I’ve especially appreciated the way that our teacher and director, Anthony LeBlanc, forced us to constantly revise our material. Even opening night, after the performance ended and we received congratulations and praise from the audience, Anthony stole us away from our adoring friends and family to meet for notes. He charged us with the task of reviewing the video of the show in order to cut the jokes that didn’t land and make the show tighter overall. He’s been a bit of a task master, but it’s paid off! Although it was a great show opening night, last night was even better! The show has hit its stride 🙂

I’ve found the whole experience of the writing program invaluable for a number of reasons. Being forced to produce new sketches every week was tough at times. In all honesty, there were days when I wanted to throw my computer out of the Starbucks window and emotionally eat all of the pastries in the display case. Nevertheless, I learned to trust myself and the fact that when I’m put under the gun, inspiration happens!

Some comedy writers fall back on fart jokes, others rely on sexual humor – my best sketches revel in politics and violence. I’m extremely happy with the sketches that I wrote which ended up on stage. The lyrics of my 90s style song about the NSA were put to music by our musical director Gwen Tulin, and I couldn’t be happier with how the song turned out! It feels good to hear people laugh at my jokes and watch the actors have fun with the improvisational freedom I gave in the second verse. Also, my strongly satirical sketch about gun violence and concealed weapons in the state of Illinois went over well. After multiple revisions and editing in accord to audience reactions, I realized the importance of not being heavy handed. Also, in keeping focus 🙂

However, my favorite sketch that I wrote with the help of Laura Pollina is a Shakespearean/Game of Thrones influenced BLOOD BATH about a group of women warriors who go on a murderous crusade to rid the world of those who lack civility and act like dicks in their use of technology. I had written a Shakespearean historical sketch, which got the ax, and when some of the female performers lamented the lack of strong, women roles in the show, I found my mind blown. I was a sexist writer. AND I’M A WOMAN! WHAAAAAAAT????? So, yeah, cut to the women murdering all of the men and establishing a new order based on common civility 🙂 I’m planning on writing much more with kick-ass women now.

Before the class I always viewed myself as a solitary writer. If I wasn’t bull shitting for a school research paper, I was a perfectionist with my creative work, and didn’t appreciate collaboration or criticism as much as I do now. Thanks to the program, I follow the improvisational motto of “yes, and”. There’s no time to get caught up in what I’m doing. The key is finding a good writing partner who compliments you well 🙂 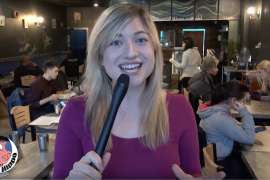