I groggily stumbled out of bed at 5am, threw some changes of clothes in my old North Face backpack, pawed at my door, and made my way to the 7-11 for a vanilla latte. It’s always a pity when you’ve gotta be somewhere before Starbucks even opens for business. Unfortunately, it became apparent that the subways weren’t even open at that time. It turns out that Taipei doesn’t start the MRT trains running until 6am, and that at 5:30, the only people outside the metro station are old men that are hacking up hairballs and spitting everywhere. Ew.

Sooooo, plan b: get a cab. There’s a Chinese saying that as soon as you step out the door, life gets expensive. It’s so true. Even when you’re going somewhere to make money!

So, I jumped in a cab, got off at the Da’An Station and got a call from the lady at my management company, telling me that I was at the wrong address. So, back into a cab I went, this time to find the bus that was taking all of us extras to Zhongli (中壢) in order to film the commercial. I guess it’s a new McDonald’s there. To be honest, I don’t know what else the city has besides a McDonald’s, because I was there until 9pm. 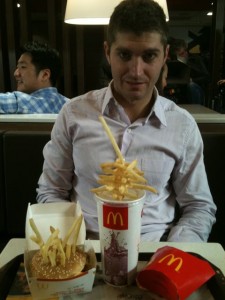 It’s always amusing when I do work in Asia. If it’s a small shoot and there’s maybe one white guy amongst the rest of the actors, I know, “that’s my boyfriend for the day!” Sure enough, me and a Spaniard, Jorge, were assigned to do all our crosses together and to sit together, pretending to eat our burgers and fries. We also made art together.

We were only working about 3 of those hours, and were passed out in holding the rest of the time. I was also reading a collection of short stories by Anton Chekhov, so I was depressed in that way that peasant and noble life after the collapsing feudal system in Russia and the realism of Chekhov can always make one depressed.

Yet, we soldiered forth, and put on a smile for the camera! 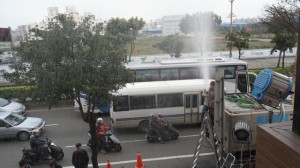 It must be fun to be a director. You call out 下雨 (rain) and it starts raining, and then you call out for it to stop raining ~ 停雨 ~ and there it stops! It’s kind of like being God. I think a good portion of the production crew was American/had studied abroad, so there was a nice mix of English and Chinese being spoken. 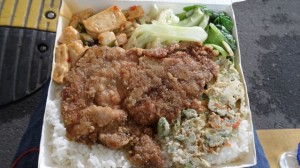 We didn’t get McDonald’s for lunch or dinner though. Instead we got Chinese lunch boxes, and we had to eat them outside. At least they were tasty! I’m actually a fan of the lunch boxes 便當 that are so popular here. They’re both cheap and filling. Usually you get three or so vegetable side dishes and a chunk of meat. Maybe even a boiled egg and some spam if you’re lucky!

At the end of the day my brain was fried and I was dead tired. I don’t get it. One does so little as a background actor, and yet it takes it all out of you. It’s so bizarre.