Vickie is a comedian, actress, writer, filmmaker, and more! 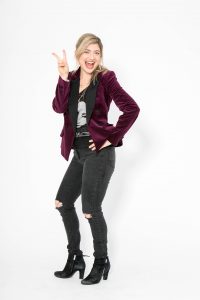 Vickie Eisenstein is originally from the Chicagoland area, but she’s prone to fits of wanderlust. After graduating from Cornell University with a degree in China Studies and Economics, she left the U.S. for South Korea and ended up on one of the most popular talk shows there, Misuda!

She then went on to study comedy in Chicago where she graduated from The Second City’s conservatory and writing programs, as well as programs at other comedy institutions like iO Theater and ComedySportz. (Check out her online acting resume!)

Yearning to create her own content, she began producing, filming, and editing video content for her YouTube channel. Google even flew her out to New York for the YouTube NextUp program a couple years ago.

One thing led to another and soon she was producing and editing videos for companies as well.

She currently performs standup and creates content in Los Angeles, where she works as a video producer and editor.

For more information on her professional experience, take a gander at her LinkedIn profile.

Want to collaborate or hire Vickie? Get in touch!