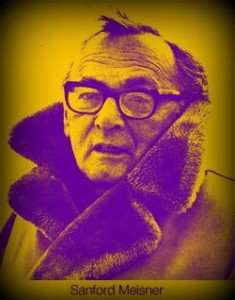 I’ve had Green Shirt Studio recommended to me by multiple students and teachers as a place to take acting classes and learn based on Meisner’s approach. Since I come to acting from improv, Meisner’s exercises and approach inherently make a lot of sense to me.

So, this morning I dragged my butt out of bed for a free 10am-3pm workshop at Green Shirt Studio, a lovely, little studio on the north side of Chicago. The five hours that we spent doing basic repetition exercises under the guidance of Andrew Gallant were deceptively simple; yet, they led us to let ourselves be more open, honest, and  vulnerable. There was a real change by the end of the day.

I’ve done some Meisner-based exercises in improv classes before and enjoyed them. Most notably, at The Second City I took Scenic Improv 2 with Rachael Mason (She is my improv GODDESS. I have so much love and admiration for her.) and we spent a week on Meisner, doing some of his exercises and then applying what we learned to improv scenes. Actually, Rachael also exposed us to Meisner’s technique in dramatic improv at The Second City (I CANNOT RECOMMEND RACHAEL’S DRAMATIC IMPROV CLASS ENOUGH) . I enjoyed the brief exposure to Meisner during those classes, and I enjoyed the straight-up Meisner work that we did at Green Shirt Studio today too.

I’m going to consider taking classes at the studio. My schedule is a bit overflowing with two part-time jobs, an internship, and classes all in the mix; however, this seems worth it!